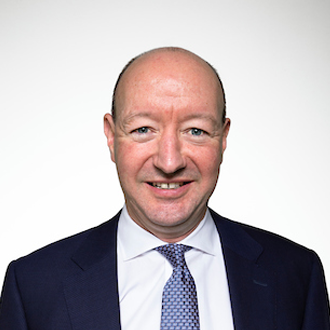 Are you well placed for a pay rise?

Considering the current climate in Australia, where wage increases are not coming close to the expensive cost of living, it’s a challenging time for employees, particularly if they feel that their current salary is considerably out of step with the remuneration they feel they deserve.

If you feel that your current salary does not match your contribution, it’s vital to consider your company’s culture and leadership. Most organisations that have a good culture and strong leadership want to treat their employees fairly and pay them fairly.

As Stephen Moir puts it, “You don’t want to be focussed purely on the salary. You’ve got to have the right culture and inspiring leadership at the top of your priority list. Getting good remuneration will come from these factors. Business cultures where people are chasing the money will eventually implode as they lose sight of their purpose. This is what we have seen happen in the banking sector”.

If there are any red flags for you when it comes to these areas, you may consider alternative opportunities in other organisations BUT it’s important to not make any knee-jerk reactions here. The single most important thing to consider initially when seeking a salary increase is the value exchange between yourself and your employer.

Companies look after people who are good at their job and have the right attitude. Being good at your job offers security as your company will not want to lose you.

But what does ‘being good’ mean. According to Stephen Moir, a big part of it is putting your hand up to take on new responsibilities and having a positive attitude.

“Employers like people with a can-do, positive attitude, who approach their work with energy and passion. They are resilient when they come up against challenges and find solutions. If you can say you’re doing all these things, you’re perfectly justified in putting your hand up for a pay rise”.

Ultimately, if your company can see that you’re stepping up for new challenges, they will reward you for it. As Stephen continues, “It’s a value exchange at the end of the day. If you’re plodding along, doing the minimal and asking for a pay rise you’re looking at it the wrong way. You have to do your job well, go the extra yard and then you should expect your company to look after you”.

Whilst wage growth remains flat, conversely, unemployment is down so there are lots of opportunities in the jobs market. If you have been with an organisation for a long time and have moved around internally, pay increases tend to be lower compared to those who have moved between companies. It may be tempting for people to make an external move in order to get a pay increase, however, it’s important to be wary of making too many external moves.

Says Stephen Moir, “Something we are increasingly seeing is junior to mid-level people getting other offers whilst in their current role, often with the chance of a large pay increase. It may be okay to do this every so often in your career but if it’s not wise to consistently move as potential employers will question your loyalty and motivations”.

As an employee you need to have a reasonably long-term view of your career path. To help build your case for more substantial salary increases as your role develops, it’s important to raise your profile internally and be visible as you take on new challenges. You then have a clear context within which to frame your request.

The 5 C’s of requesting a pay rise 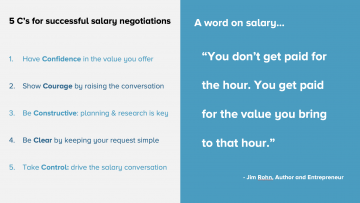 When a pay rise is not possible

If the outcome is not as you hoped, don’t despair. Keep in mind the long-term goal and ask if you can set a time-frame for the next review, perhaps 6 months rather than a year, and the targets you need to meet in order to be successful. You need to be clear with your boss that you want to keep progressing in your career.

Sometimes good companies are just not able to offer you a meaningful pay rise, even if they would like to. In this situation, you may want to think outside the box about other things you could negotiate as ‘added-value’.

This could be a short-term bonus for completing a specific project within a time-frame; flexible working arrangements, where you negotiate an extra week of holiday or the opportunity to work shorter hours. You may even ask your boss if the company could cover the cost of educational courses or, for more senior employees, support you with additional time off to sit on a board. Consider what’s important to you and what would add to your feeling of satisfaction within your job.

If you’re doing well at your job and have taken a constructive approach in asking for an increase but are still not getting fairly remunerated, it’s perhaps then the time to consider other opportunities. The key here is to take your time, be considered and do your research when looking at any new opportunities. It’s important to be mindful that you’re moving towards a new opportunity, rather than running away from your current situation.

As Stephen Moir says, “If you’re making a move based on money alone, you’re making a bad decision. Remuneration should be the happy outcome of a good decision and, as we have said, great leadership and culture will hold you in good stead for a satisfying job and a fulfilling life”.

Curious about the going rates in your sector? Better understand your place in the jobs market with our 2018/19 salary snapshot. This covers annual salary packages for finance and accounting professionals as well as average hourly rates for contractors.